Too Load, Too Long

Too Loud. Too Long.

The extent of damage to your hearing caused by noise depends on: 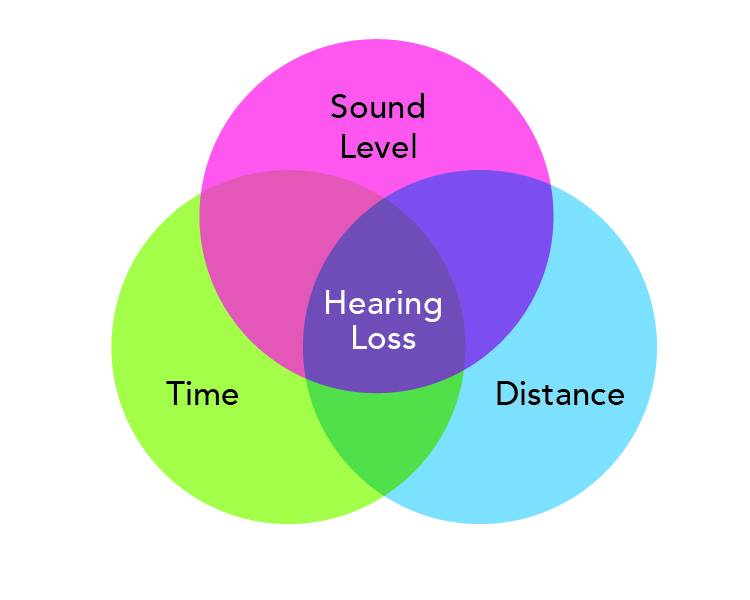 The louder the sound, the more damage it can cause to your hearing, and the quicker this damage will occur. Sound is measured in units called decibels (dB), just as height is measured in feet or inches. Because people can’t hear all frequencies, or pitches of sound, A-weighted decibels (dBA) can be used to describe sound based on what human ears can actually hear.

Sounds at or below 70 dBA are generally considered safe. Any sound at or above 85 dBA is more likely to damage your hearing over time.

Researchers have found that people who are exposed over long periods of time to noise levels at 85 dBA or higher are at a much greater risk for hearing loss. That’s why some workers are required to wear hearing protectors, such as earplugs or earmuffs, while they are on the job.

Many devices that children use today have noise levels much higher than 85 dBA. For example, music played through headphones at the highest volume is often 94-110 dBA. For reference, 110 dBA is more than 100 times as intense as 85 decibels!

Manufacturers are not required to limit the maximum sound output of music devices. Fortunately, many devices do have volume limiting controls, which allow you to set the maximum volume to a safe level.

The impact of noise adds up over a lifetime. If you are exposed to loud sounds on a regular basis, your risk for permanent damage increases over time. Even a single but long-lasting loud event can cause damage. Sounds at or below 70 dBA are usually considered safe, even if they last a long time. Noises are more likely to damage your hearing if they are:

The popularity of music streaming apps and smartphones means that music is now more portable than ever and we can listen anytime, anywhere. Most people listen at safe levels – they keep the volume down and limit their listening time to less than a few hours a week. If that’s you, great! You’re looking after your hearing and you’re not maxing out your daily sound dose. But if you like listening to music on your headphones for long periods or at loud volumes, it’s good to know how this impacts on your daily sound dose and how you can make changes to reduce your risk of hearing damage. Puro Sound Labs do not want you or your kids to damage your hearing. Our kid’s headphones will not go over 85dB. Choose from the BT2200’s which reduces 82% ambient noise or the Puro Quiets with Active Noise Cancelation. All headphones give great quality sound and look great. We have great quality gaming headphones that only go up to 85 dB. 1 in 8 kids today suffer from hearing loss. This is the reality that parents are forced to confront, and it’s only getting worse. In fact, a recent study showed that 19.5%, or nearly 1 in 5 children between 12 and 19 years old, suffer from some level of noise-induced hearing loss. The cause of this epidemic is ...